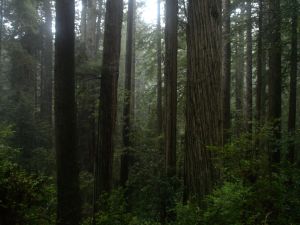 We continued on the ninety-nine north past the fork in the road where the five north split off. Normally, if I were planning on heading up north out of the Valley and up to northern California I would have turned off and taken the five, but I was still hoping to get rid of my story telling hitchhiker sitting in the passenger seat.

“So do we just keep here on this road and continue north?” Cindy asked.

“Yeah, we just keep going on this route and we’ll run into Oregon soon enough,” I responded. I wasn’t lying really. It was obviously easier and quicker to take the five north up to Oregon, but I wanted to stay close to civilization and travel straight through the familiar small towns that I had passed so many times on the road.

“Do you know how long it will take to get there?” she asked.

I really didn’t know to be honest. I had never driven this far north on my own before, and I never really pay attention in the car when someone else is driving anyway. I was only following the signs and heading in the obvious direction north. If I was able to drop her off somewhere—great—and if I was forced with violence to drive far more north than I have ever been—not so great. I would just have to keep brainstorming for ways to ditch this girl.

“So—the rest of the story,” she said adjusting her self to get more comfortable in the seat. “I want you to hear this story and hear me out. I think you would want to help if you heard the rest of this.”

“I just don’t know how this has anything to do with you.”

“I’ll get there if you let me finish.”

Sarah had just learned her name, met her husband, and found out where she had lived for years when she walked out of the woods that morning. Although she remembered nothing, she secretly felt as though she should move on elsewhere. She hoped to at least confirm the story with her alleged husband.

“Forget the doctor right now,” Sarah said. “Could you help me figure things out right now? Like pictures and that sort.”

“Yes, I can definitely help with that,” James said. “Come right on in and make yourself at home—since it is your home and all.”

She walked into the large wooden house with a feeling of uneasiness. The house was foreign to her, and yet this strange man calling himself her husband said it was her own. Everything felt so incredibly strange from the large windows on the edges of the front doorway now behind her to the oak wood floors spreading out from underneath her bare feet to the rest of the cold wooden house.

Although there were lights on and the windows free from curtains, the house seemed dark and unlived in. Sarah took a few moments to adjust her eyes to the dimmed environment and slowly walked forward into what looked like the family room. She found a few pictures of what looked like herself standing next to the man calling himself her husband. Every picture, including the wedding photo, looked as if they were all recently taken outside around the house.

“How long have we been together?” Sarah asked.

“Just a few years,” James said. “We met, fell in love and married pretty quickly. You just couldn’t wait to move in this house that I built for you.”

“What is our wedding anniversary then—”

“Show me the certificate—”

“—We were married in Vegas and lost the certificate.”

“Why would we get married in Vegas if we could have had a wonderful ceremony out here on the property?”

“You didn’t want to do that. You don’t have any other family members that could have shown up.”

“Why not? Where are my friends? Why couldn’t we just invite your family? Why do I not remember any of this? This doesn’t even sound like any of the things that I would do.”

“How would you know? You couldn’t even remember your own name.”

One thought on “Shock Wave: Part 7- What Would She Have Done?”