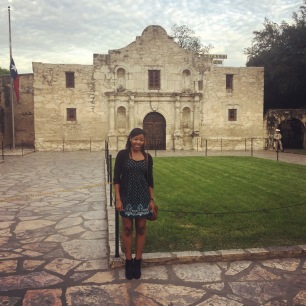 The look of shock and horror had crept up on her face. I sensed jolts of confusion from her as I spoke the words. “I would like the number four without meat.”

Her eyes went blank in expression before she refocused them again on me as I stood patiently at the cash register. “Did you want another type of meat?” she asked hoping quietly to herself that I had just misspoken.

“No, just the sandwich without any meat.”

She turned around for a second to look for help and asked another cook behind her, “Do we have sprouts?” She turned to face me again. “Did you want sprouts? We can put sprouts in it.”

I smiled. “Sure, that sounds great.” I realized that the encounter that I had just gone through wouldn’t be the last in the beef state of Texas.

In fact, it happened a few other times when I tried to order the salad bar near the border.

“And so, you wanted a T-bone steak with that?” the waiter said.

I let out a small chuckle. “No, that’s not what I said. I was asking for a side potato to go along with it, but with no meat.”

Because I was traveling to Texas for work, I wasn’t able to stop off at any of the veggie-friendly restaurants or do much of anything else, on my own. I was aware that the cities of Austin and Round Rock had more vegetarian and vegan options than anywhere else in the state, and if I had a chance to venture through those areas, I definitely would have. However, I had to keep to a strict timetable with my meat-eating co-workers.

From what I could gather, there were areas in Texas where the restaurant owners and cooks didn’t know a world where there was an option not to eat meat. There were also places that had landed on America’s most vegetarian-friendly cities list. I had come to realize that Texas could be described as a melting pot of Southern and Southwestern areas with pockets of various ethnic groups in different locations.

Texas could be its own country with how huge it is in size and vast it is in its culture, language, and traditions. I would definitely go back on my own to explore the Lone Star State, but I would love to do it next time some of the more veggie-friendly places.

2 thoughts on “A Vegetarian In Texas”