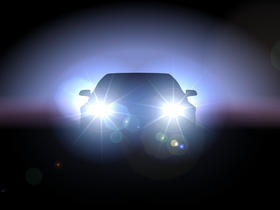 There I was, standing on the corner of Temple Ave and South Campus Drive, repeatedly pushing the button at the stoplight as if doing so would get me across the street to the University Village any faster. I wasn’t in a hurry to get there—in fact I should have still been on campus getting work done in the library. I had just wanted to come back to an empty apartment so that I can crash on top of my comfy bed. I had my heavy messenger bag filled to the brim with literature textbooks and short novels, and I wanted to escape the beating rays of the hot sun, which didn’t help alleviate the heat trapped within the black cardigan that I was wearing.

I stared blankly into the green light fixed highly above the intersection that told the cars rushing by in front of me to keep going past the intersection, and I continued to do so as the big bulb of light moved into the space where it turned yellow, and then red. I quickly turned my head to my destination across the street and watched the bright red hand on the streetlight pole swiftly change to the bright walking stick-figure that let me know that it was my turn to go.

As I began to lift my foot to place it into the sea of black asphalt just over the curb, out of nowhere, in a flash before my eyes I saw a big dark-gray van speeding toward me well over the speed limit, and even though the light facing him in the intersection was clearly red, I watched the van unsafely turn the corner while its breaks went squealing by. He never stopped, and I realized that if I had just stepped off into the street, like I have seen so many other Cal Poly Pomona students do when crossing the street to get to the Village, that I may have never made it across the street.

To make this story even more interesting is that this whole “almost getting hit by a car scenario” isn’t a new one for me. A couple of years ago, during my sophomore year at the University, I was in my car driving at the speed limit in the middle of a bright and sunny day down South Campus drive near the University’s Residential Suites. I was fully aware of the giant eighteen-wheeler truck driving on the other side of the double yellow lines in the road, and continued my way down the street.

Of course, without the warning of a turning signal light from the truck, my heart skipped several beats as the truck narrowly missed plowing its huge hunk of metal right into me as it turned in front of my car. I had shouted,  what seemed like an odd choice for a last couple of words, that “I haven’t finished writing my novel yet!”

What concerned me after I almost got mowed down by the gray van last week was that the thoughts flashing before me weren’t about the novel that I still never found time to finish, but that I wasn’t quite sure of where I was going in my life. I didn’t know if I was on some path that led to my to a decent future, and I thought to myself about whether or not I should even try finishing a novel.

I do, however, have to mention that finals for me were coming up pretty fast, and that all of my papers and projects were do all at the same time on Monday. And on top of I’ve receiving pretty mediocre grades in all of my classes, not terrible, but just meh. I think my literary dreams started waning and weren’t as strong as before. I mean, how was I supposed to think that I could get a novel published sometime in the future if I got “B’s” on everything in my undergraduate studies? I was tired of all these “B’s” and I guess I just wanted a little push from the universe again that told me that I was on the right path.

Should I still be writing stories and typing up silly blog posts, or should I just find something else to do, I think to myself now. I guess that will take a little more time than just a flash before my eyes.