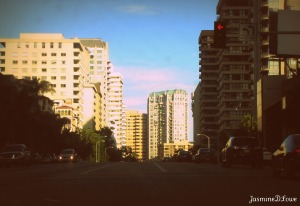 Busy streets filled with quickly moving cars that carried on to heavy congested traffic on the highways; it was a stark difference from the slow-paced cow-filled town back in the Central Valley. I had attempted to empty my mind and dig deeper to find myself in the wide open spaces under the bright blue country skies, but of course, any success made in this endeavor would be wiped clean with the large industrial towers grouped together in the large city.

I had about two weeks to get my online and office work schedule together before I had to start classes again. I dove right into queuing posts and writing articles before I realized that the random trip that I took to the Central Valley hadn’t really gotten rid of any of my concerns. Apparently you really couldn’t run away from your problems.

I took time during my allotted breaks to soul search and also to research solutions in order to figure out all of my problems by the time that I went back to school, but because life doesn’t work that way I was instead left in a state of panic.

Thoughts about my final quarter in college, grad school programs, job and career decisions, travel, and money started to bombard me. My transient lifestyle was okay for a hippie college student, but concerns about adulthood out in the real world hit me like a ton of bricks.

I had friends moving out on their own, traveling the world, getting married, having kids with their careers and houses and such and just becoming the type of responsible adults that I wanted to be. I was worried, along with my currently problematic car, that I wouldn’t be able to get to where I wanted to be in life because I wasn’t where I wanted to be right now—if that makes any sense.

It’s funny though, a talk that I had with my boyfriend about pursing a new career had made its way back to me as advice from my mom. The whole not being afraid to make mistakes and take chances eased my concerns a little, and it was all fine and dandy to think that way, but I still had one major concern on my mind about my decision making and achieving my goals. I knew it was okay to make mistakes and mess up at the moment because I was young, but besides just changing the course of my life, I knew that my decision could also ruin something that I considered great.

Read the journey from the very beginning and then start A Little Mulch of Letters from the top.