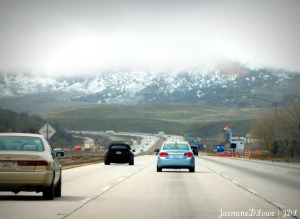 Cindy and I woke up the next morning and left the small motel in the town of Tracy behind after fueling up the gas tank and our bodies at what seemed like the town’s only gas station. We had roughly six hours left, of driving through the Northern part of California that everyone forgets about, before we could even cross the state boarder into Oregon and I wasn’t really sure where we were going after we got up there. The hitchhiking passenger in my car’s front seat was still being incredibly mysterious, and I still didn’t know anything about how she was related to this strange story. As we made our way back to the five-freeway I decided to make it my mission to find out more about the stranger sitting beside me.

“Hey Cindy?” I tried to bring up my question nonchalantly. “You mentioned you were from Montana and that you choose to travel freely without being tied down. Have you ever met someone who would make you stay in one place?”

Cindy looked ahead toward the dashboard as if her eyes had the ability to tear through solid objects with intense lasers. I wasn’t sure if this was the reaction to an untouchable subject or if she was just tired of me trying to pry more information out of her. At this point, however, I was a little more concerned about her feelings and felt as though I had struck a chord.

“I met a couple of people who I could have stayed in one spot for,” Cindy replied after a quiet sigh. “The story didn’t end the way I would have liked it to end, and now I’m on the road again to try and fix what was broken the best way I can.”

I glanced over at Cindy still looking at the center of the dashboard with such shocked and sad eyes. It was as if she was reliving something all over again in her head. I tried to look over occasionally to see if I too could see the flashes of life emerge like the shaky images projected out from an old reel of film. I let her collect herself again as I continued to drive north.

“I swear this will all make sense when I end the story and let you read a couple of things that I have carried with me for a long time,” Cindy said. “Once you hear everything you will understand why this is so important to me. You will know why I must go to Oregon and why I couldn’t let you go. Just give me a chance to tell my tale and get to Ashland, Oregon.”

I had noticed after a short pause in the conversation that she had turned her attention back to me. “Please,” she said. And so I listened.

One thought on “Shock Wave: Part 19- I Listened”