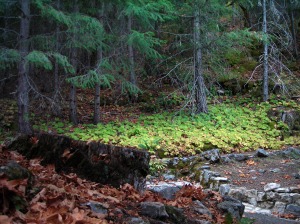 All of the swirling thoughts of time that has passed and the images of a blonde-haired blue-eyed women sitting next to Sarah inside of a blue truck had forced an idea in her head that had been deeply seeded in the back of her mind. It was obvious how her husband and her psychiatrist were involved with her memory loss. Sarah knew that they were the ones responsible for it. They wanted her to forget something that was so much a part of her life and her being that it has nearly driven her to the state of madness. A piece of her soul has been partial ripped, and she was going to figure out how and why.

It was in the middle of the afternoon when she did another search around the house for clues. It was obvious that there was nothing in the house that could tell her about her past and so she walked out of the wooden house to search the property. The bright and shining sun gently dropped from its highest perch as Sarah walked further away from the house and into the woods to where her first memories of this strange life were made.

She followed the stream that she had once done several weeks ago and found herself back in the thick brush in the middle of the forest that had greeted her with confusion. Sarah found herself back in the spot where she first woke up and looked around for clues to where she was originally coming from. She faced the opposite direction of where the house was and looked closely at every little piece of shrubbery and tree when something small, but out of place, caught her eye.

Sarah swiftly walked through the forest away from the water toward the object letting her pink cotton dress flap quickly behind her. She nearly jogged for a quarter of a mile before stumbling upon a rusty shed with dusty windows, but it wasn’t until she scanned the parameter before she saw something peeking through one of the windows. She walked closer carefully noting that she could not actually be alone. She crouched down by the window and slowly lifted herself to peer inside. Something blue was staring right back at her.