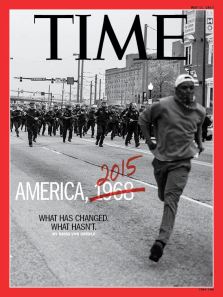 In April 2015, Baltimore police had arrested 25-year-old African-American, Freddie Gray. He had sustained injuries to his spine and larynx, fell into a coma on April 12, and despite multiple surgical attempts, he never regained consciousness. Gray died a week later in police custody. Six police officers have been suspended pending an investigation, but not much else has been done to prevent this sort of thing from happening again.

According to the Bureau of Justice Statistics latest available report, published in 2011, at least 4,813 people have died while in custody of local and state law enforcement between 2003 and 2009. Sixty-one percent of those deaths were classified as homicides.

There were an estimated 98 million arrests in the United States by local, state, and federal law enforcement from the years 2003 to 2009, according to FBI statistics. However fifteen states, not including the District of Columbia, did not consistently report deaths in police custody during that period—and Maryland, along with Georgia and Montana, didn’t submit any records at all.

What started as peaceful protests voicing their concern for their lives in Baltimore, gave way to civil unrest following the death of Freddie Gray. As of April 28, at least 250 people have been arrested, thousands of police and Maryland Army National Guard troops have been deployed, and a state of emergency was declared in the city limits of Baltimore.

Before the unrest, little coverage of the protests had occurred. The majority of the country had no clue of what was happening in Baltimore until they made themselves visibly noticeable. But those acts of anger from frustration of how the law has been used to kill instead of protect has sparked conversations about “what would Martin Luther King Jr. say?”

A text came in on my screen from a group message that was created in response to the protests that had turned into civil unrest.

“The ultimate weakness of violence is that it is a descending spiral begetting the very thing it seeks to destroy, instead of diminishing evil, it multiplies it. Through violence you may murder the liar, but you cannot murder the lie, nor establish the truth. Through violence you may murder the hater, but you do not murder hate. In fact, violence merely increases hate. Returning violence for violence multiplies violence, adding deeper darkness to a night already devoid of stars. Darkness cannot drive out darkness; only light can do that. Hate cannot drive out hate; only love can do that.” – Martin Luther King Jr.

She typed a question after the MLK snippet. “What do we think about this quote?”

A response from a Black individual in the group had shed some insight on what was going on in the minds of the people of Baltimore.

“But if society wants to block out love and community through oppression and racism, what else do the people have? Their voices are silenced, and they believe that their lives mean nothing. Their communities become an endless cycle of crime and uneducated children because they have become inhuman in the eyes of those looking through them. With out a voice all you have is your actions. So, because it’s a different time and different monster, I’m going to have to disagree with Martin for the society we have now.

MLK was fighting to change legislation. We have since done so, and we have those rights, but people assume oppression can’t come in different and more evil forms. Today’s demons are even worse because the law is now what is killing us. People can literally kill someone and there would be no consequences. That’s when you know there is a huge shift. Old tactics won’t work these days, and I’m really sad because all we want is the right to live.”

I thought back to my time spent in my college Ahimsa club—Ahimsa, in the Hindu, Buddhist, and Jain tradition, being defined as the principle of nonviolence toward all living things. A part of the reason why I have remained a vegetarian, eat mostly vegan and try to avoid situations where acts of violence would occur, has been because of this word. However, pacifism is great as long as you’re not dead. Sitting there why anyone harms you without defending yourself becomes, not heroic, but cowardly when you’re facing death. And because you can only turn your cheek when you are alive and you still have a cheek to turn, the issue of remaining nonviolent gets tricky.

I think everyone wants the violence to end, and I think that’s something that we should think about during these times of unrest after more unarmed Black people have died in the hands of the police. They too have peacefully turned a cheek, but when one is faced with losing the ability to live another day to do so, it’s understandable how people can, instead, turn toward the problem and try to face it head on in any way they can.