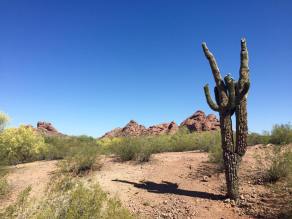 I glanced over at the odometer and watched the digitally scribed numbers on my dash grow as I crept forward through the California desert. Death Valley’s hot breath blew past my windshield and into the open windows of my mid-sized vehicle as my tires continued to spin over dusty asphalt roads that were beginning to sizzle in the late spring heat.

The car full of people that I was towing were all headed over the first of three state lines that I would end up crossing within a month’s time frame, and with every border I crossed, and every mile that I traveled, I could only hope for more to come.

Phoenix is where I ended up standing in the middle of a good-sized hole poking through the top of the natural rocky structure. I was able to look down onto the reddish dirt and rocky landscape  of the copper state that occasionally gave way to tall prickly plants. The desert landscape covered in cacti had reminded me of the old Wild West with its natural simplicity.

I was able to watch the change slowly, at first, of the primarily concrete landscape to the barren desert surroundings in Arizona, but I had 2 hours the next weekend to watch the California landscape from the clouds gradually shift from the urban to the rural and back before being covered completely by tall green trees.

I was able to look down from the view of a swiftly moving plane window to see the Northern Californian landscape give way to the lusciously green state of Oregon.

After arriving in Portland my travel partner and I picked up our rental car and crossed another state line to the official evergreen state of Washington. We broke cheesy garlic bread with locals along the waters that separated one state from the next.

My travel partner and I ended up running over 13 miles through the state of Oregon through the second largest town, according to some friends that we had met up to run with, before leaving the beaver state to go back to the golden state.

When it was finally time to climb into the Uber after landing at the airport, I thought back to the state lines that we had crossed. The four states in a few days would just be the beginning of the borders we traversed to trek across states lines.

2 thoughts on “Across State Lines”