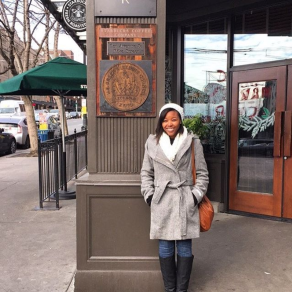 Sleep deprivation can do wonders for those who have a fear of heights. I had earned my title of the walking dead the day before my recent trip to Seattle, Washington by attending a birthday dinner after work for a friend who lives nearly 100 miles away in Palm Springs. It was great to catch up and chat, but my scheduled 7:00AM flight out of Santa Ana made me question all of the choices I have made in my life.

Needless to say, 10 minutes after takeoff my sister and I were slumped over passed out in our still upright airplane seats. It was a refreshing 2 and a half hour nap that go us ready for the weather that went from a mild SoCal 65 degrees to a frigid Northwestern 32 degrees in Washington.

Upon landing, my sister and I immediately threw on our fluffy scarves, warm beanies, our large winter jackets, and gloves so thick that you could forget about moving your fingers. We went into a quick shock when our exposed faces felt the sharp whipping of the cold air, and felt a little silly watching the Canadians on vacation, the native Washington residents, and the Oregonians on holiday walking in nothing but a wind breaker and, in some cases, summer shorts. However, it was too cold for us to truly care too long about out how we were dressed when we got off the plane.

Our first stop after arriving in SeaTac was the very first Starbucks at Pike Place. Without using any directions, I followed the trail left by a wave of tourists holding Starbucks coffee cups and parked down the street from the sign. I took my touristy photo in front of the plaque and ordered a tall Pike Roast with soy and Instagramed the hell out of the most cliché social media photo that you could ever take.

After the ultimate Starbucks experience, my sister and I spent most of the day exploring the shops, eating fresh foods, and purchasing homemade crafts at the Pike Place Market before checking onto our conveniently located room at the Fairmont Olympic Hotel. That night we watched my Los Angeles Rams lose to my sister’s Seattle Seahawks while drinking Rainier beers next to the only other LA Rams fan in the city. We had a lot of fun until the beer buzz wore off and I remembered that my poor SoCal self was standing outside in the elements under lightly falling snow.

The rest of our time in Seattle was spent visiting all of the amazing museums that came in our Seattle CityPass, which included the Chihuly Garden and Glass, the Museum of Pop Culture, the Space Needle, and an extremely poorly planned boat tour in the snow.  It was still an amazing tour of the city, but I couldn’t help but think about investing in stock for those hand warmer packets after cruising on the icy cold waters that also touched Canada’s snowy tundra.

We ended up accidentally finding the infamous and highly disgusting gum wall in an alley that we thought we were going to be mugged in, finding the house that they used as the Intern house owned by character, Meredith Grey, in the television show Grey’s Anatomy, and the building that they used for the front of the Grey-Sloane Hospital before hopping on our late flight back to California. My sister had to dodge crazy looks from the residents of Queen Ann Hill to snap a quick picture of the house that has been repainted by the current owners.

I would love to go back when it’s warmer and see the Fremont Troll, the Pacific Science Center, and visit more of the art museums that we didn’t get to see, but for now, I’m planning for some exciting new trips as the year continues.

3 thoughts on “What to Expect as a Tourist in Seattle, WA”