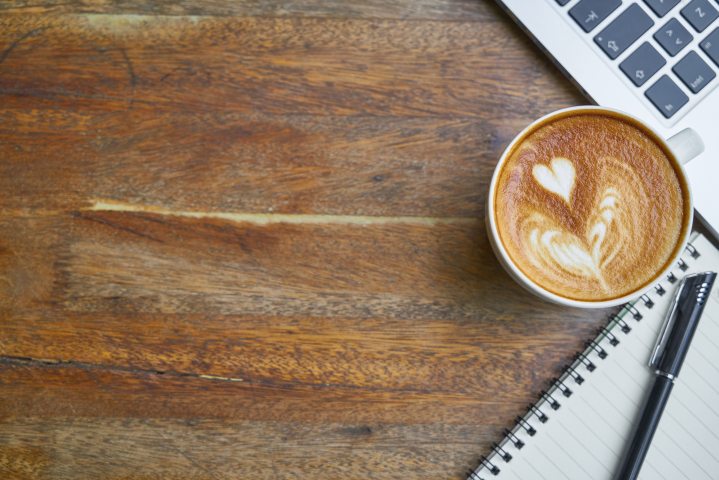 “I have a London Fog with almond milk here on the bar.” The man behind the small coffee shop counter set down my reusable thermos filled with scalding tea and milk and smiled at me.

“Thanks,” I said adjusting my reading glasses and grabbing the cup. I brought the beverage over to the uncomfortable couch where I was sitting and placed the lid on top. I picked up my laptop and began typing up an article where I had left off.

It was part of my weekly routine. I would walk into the loud local coffee shop downtown and write for an hour or so after work before going home. It was the only way I would be sure that I got some writing in, and the only other opportunity where I could relax while eavesdropping on people.

I listened to the buzzing conversations in the noisy café. Students would be scattered around attempting to study, other locals would sit around and chat with each other raising their voices over the sound of the espresso machines steaming caffeinated beverages so that they bubbled and foamed. I would wait for a regular customer to come in and pick up a conversation with the barista. Those were, most often, the juiciest chats.

“I’m finally getting out of here,” the barista said as he handed a freshly brewed cup of coffee to another regular.

“Really, that’s great,” the regular replied grabbing the coffee to take a quick sip. You could see the steam from the coffee at molten lava temperatures rising from the medium-sized cup. The woman blew on it first, but I’m sure she still burnt her tongue.

“Yeah, I’m going to Brazil,” the barista said feigning a soft grin. “I already put in my few weeks’ notice. I really hate it here. It’s just time to go.”

I took the liberty of completely stopping what I was doing in order to hear the barista’s entire story of how he traveled from the Midwest in hopes of finding himself and his own place in California. However, what he thought California would be wasn’t what was offered. The mystical fairy tale come-to-life didn’t occur. He was still lost, and he felt limited working as a barista.

Dreams of helping others in a new land had enticed him. He would be making a difference, meeting new people, and seeing new things. He liked the fact that he would be, once again, ripped from his comfortable cocoon of familiarity. He enjoyed the fact that he was taking the leap to better himself and open his own door to positive change. He didn’t know if everything would work out, but he knew that he would be upset with himself down the road if he didn’t try.

After his shift, he hung around a little to say goodbye to the regular customers. I had used to come later to the shop after his shift and didn’t know him well, but it still felt as though I was losing a bit of the community as he waved, was hugged by young hipsters and artists, and was wished farewell by the rest of the staff. I took another sip of my incredibly hot tea as he looked around again at the café.

I watched him leave with his backpack in tow and his beanie pulled tight over his ears to face the cooling Southern Californian weather. I smiled at the fact that I probably wouldn’t see him again, not because he made bad beverages, but because he would be out there doing what he wanted to do and making the changes in his own life to achieve happiness. I gave him a small wave goodbye as I continued sipping my tea and watched him smile and then walk out of the café for the last time.