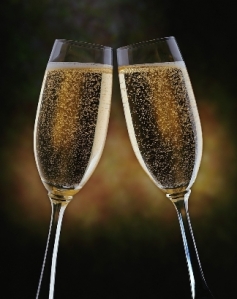 The Ball Drop had taken place and everyone raised a glass of cheap sparkling Champagne to the New Year. We were dressed up in our marked down holiday sale sweaters, and our cheap dresses from “Forever 21,” feeling invincible and watching the illegal fireworks spark in the background.

I grabbed my phone to text everyone on my contact list “Happy New Year” when he said it—“I love you.”

“What?” I was generally shocked and surprised that my boyfriend, who I had been close friends with for years and then had casually dating for a little while, said those three words.

His face quickly went from a loving smile to a frown.

I felt awful for just standing there and ruining the moment, but as I thought about what had just happened I replied with an “I love you too.”

He quickly changed his pitiful sad face back to the original smile, and as we began reigning in the New Year I saw a glimpse of what my future with this man could be like. For a moment we were in love and ready to take on whatever came at us, but I promptly found that this may not have been the case.

Days later, my boyfriend and I returned to school and settled back into our apartments. As I was getting ready for my new quarter of classes, buying my parking permit and all of my terribly expensive books, I noticed that something had changed.

Stepping foot on campus after being separated from my boyfriend for a few days felt incredible different. I panicked.

What the hell am I doing? I had thought to myself. Needless to say, two weeks of awkward nights at my boyfriend’s apartment due to my evasive behavior made up my mind to abruptly dump him.

I met up with him outside of his apartment and told him that I wanted to break up. He stood there staring at me. It was the same stare that I had given him when he told me that he loved me only a couple of weeks ago.

It was a quick and simple break-up. He asked if we could remain friends and I said yes. We hugged, he walked back into his apartment and as soon as I started walking back to my apartment on that cold and wintry night, I felt the urge to run back and call the whole thing off.

That night on Facebook I changed my relationship status from “in a relationship” to “single.” His friends commented on the sudden change.

To be honest, I didn’t know what had happened either.