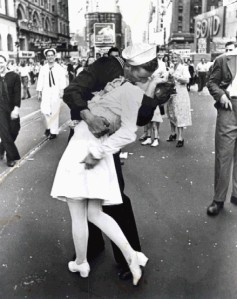 If you keep looking around for a sign in life and you can’t find what you’re looking for, maybe the fact that you were even looking around for something in particular is the actual sign. This is at least what I thought up until a certain point.

I thought it was best to leave my ex-boyfriend alone when we split. After all, I did spontaneously break up with the guy. I avoided running into him by steering clear of certain areas where he would frequent, and I’m pretty sure he did the same. Of course this didn’t last forever though.

There he was walking in my direction. We hadn’t seen each other in months so it was a surprise for both of us when we did finally cross paths. There was no immediate awkwardness. We hugged each other and had to hurry off to our classes, but this encounter with my ex didn’t end after we scurried on to complete the rest of our day.

He was now in my thoughts again, and I wondered how everything would be if I had never broken up with him that night. I debated calling him and spent a period of time in an intense tug-o-war with my mind, and after the debate was over I picked up my phone and decided to text him.

At that moment when I began to grab my phone, I received a text. It wasn’t from my ex though. It was eerie and unintentionally timed by one of my best guy friends. Completely forgetting about the huge task that was I planning on engaging in, I began to have a conversation that ended up lasting an entire day with my friend.

Not surprisingly, we ended up hanging out the next night. He, a mutual friend and I went out for ice cream, watched a late movie and then we headed back to their apartment for margaritas. It was about our third or fourth margarita in that our mutual friend decided to get up off of the couch and pass out in his bed.

Then it was two. He and I chatted until God knows when before he stopped the conversation, gently grabbed my chin, and kissed me.

I was surprised at first. I thought to myself, what about the guy that I was going to confess my love to before this?

The incredibly passionate kiss grew even more with fervor and so the next thought that came into my head was, screw that other guy, and after 30 minutes of intensity and him telling me that he has wanted to do this for a long time, it ended. I got up and walked out of the front door, confused and fixing my wildly savaged hair.

The next day I got a text saying that I had left my jacket behind at his place. Shit! I thought to myself. That meant that I had to face what had taken place that night fairly soon, but he instead managed to drop my jacket off without ever mentioning that night.

“Guys are jerks. Do you want me to kill him?” my friend from second grade said.

“No, it’s okay. You don’t have to kill anyone,” I said quietly chuckling.

“So it meant nothing?” my college friend asked.

And as I ended the phone conversation with my friends I thought to myself, well that’s that.