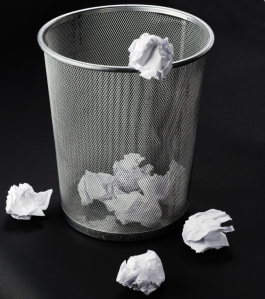 There I am sitting in front of my computer with my finger tips resting along the familiar home row keys. It’s three in the morning and my eyes are blood-shot red from a mix of frustration and dreadful exhaustion. For a moment the world has stopped but the minute hand on the clock is swirling around and passing the twelve numbers at record speed. My eyes continue to glare at the dimly lit computer screen and I can, ever so slightly, feel the ambient light burn into my retinas. Clearly I’m not procrastinating. I would love to be able to type at least a few words on the laptop that was probably over heating so badly that my soft bedding would eventually catch fire, but instead I was peering into the blinking cursor hoping that eventually something would just magically appear.

Having writer’s block is probably the worst thing for someone to experience. Sitting there and waiting for something to fall out of your head is the equivalent of trying to watch an ice cube melt in the snow. It isn’t impossible, but it’s surely something that isn’t easily done. It’s a quiet torture that constricts the creative flow of the writing process and the unseen evil creeping up inside you that holds back any form of artistic expression, so cruel in fact that it doesn’t even leave you with your thoughts.

And here I am pleading with Apollo, praying to St. Francis de Sales, and waiting for help from all the muses and Ecanus with my finger tips still resting on the computer’s familiar home row keys. I want this writer’s block to go away so that I can live again, but for now all I can do is sit here and breathe.

One thought on “Writer’s Block”