In the past, a marriage was supposed to function as a property contract for the groom. He was to own his wife and all of her possessions, and she was suppose to sit in a corner and just take the dude’s name (but that’s for another discussion). 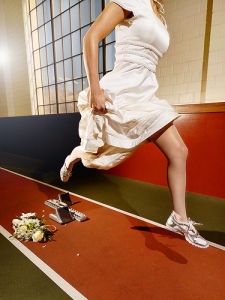 Well. Here is that discussion.

I read recently that only 20 percent of people ages 18-29 are married compared to the 59 percent married in 1960. Many people in response to this news are blaming the lack of faith in religion, and more independent woman out looking to better their lives before settling down for the drop in the “I do’s,” but is this new statistic even really a problem that we have to blame on something?

I spoke before in my previous discussion of marriage about its importance and incredible significance and about how people didn’t really take it seriously. *Cough* Kim Kardashian *Cough* *Cough* I talked about the symbolism brought into the marriage ceremony and all the people in the LGBT community that weren’t allowed to partake in that special event because  of some snooty people who want to keep marriage to themselves but end up getting divorced anyways.

What I didn’t talk about in that post, was the insane amount of social pressure piled upon young straight individuals to get hitched, have 2.5 kids, and a white picket fence around the house that put them into so much debt.

So what if less young people are tying the knot? From the looks of it, half of all those shotgun weddings failed like a botched kidney transplant done in a back alley. All I’m saying is why don’t we all wait until we’ve lived a little as an adult, found out who we are, and even what we liked in a partner before we signed a paper that shackled  brought you together with your significant other for the rest of your life.

Marriage is a serious commitment that should take a serious amount of time to think about before you jumped the broom. So older people, stop asking that poor college girl at the family gatherings when she’s going to walk down the aisle, and young people, hold your f#cking horses and enjoy this time of chasing dreams, living in crappy apartments, and eating old Ramen noodles in a cold and tiny kitchen. It’s really a part of growing up that everyone should be able to experience before a wife or husband and bratty adorable little kids come along.